A container to Tanzania

We traveled a long way, both in time and in distance, to get material for the children with spina bifida and hydrocephalus to the right destination.

It’s 2019, and we had just found out that we needed to leave our office in Brussels in 2020 because the building was to undergo a thorough renovation. In that office, materials that ensure that a child with spina bifida can lead a dry and social life were stored. With that material and some simple techniques, we train children with spina bifida and their parents to ensure that after a few days, most children are dry and clean. Aside from children staying dry, clean, and avoiding infections, this care also prevents kidney damage!

To get the material to parents in our projects, we transported the materials ourselves. We would fill out more than half of our suitcases with this material on every trip to projects. That's how it was getting where it needed to be. We could carry material for 100 children per trip per person. Quite unwieldy, but transport to Africa is expensive. In 2019, after we found out about the office building renovation, there were still thousands of pieces waiting to travel to Africa.

On Wednesday 27th November 2019, I spoke to a friend, Tom, who works in the transport sector. I asked Tom what the best possible way was to get that material to Dar Es Salaam (Tanzania). We were going to set up a local office there in 2020 with a storage facility and from there the material can leave for neighboring countries. Tom said that filling a container is probably the best way.

And so began our story of the container that travels a long way from Antwerp (Belgium) to Dar Es Salaam (Tanzania). A story of blood, sweat and tears.

At the beginning of December 2019, I asked Tom to make a quotation. Obviously, the costs for our non-profit organization should be as low as possible. Tom collected all costs, including the local ones in Tanzania. He remitted certain costs in Antwerp as a good gesture for our cause.

I received the first quote on January 21, 2020. Since we were short of hands and time, we decided to have the container leave in May or June 2020. That gave us time to collect material and to order and have more medical material delivered, so we could fill the container fully. In the meantime, we were renting a warehouse near my home. That part was easy and convenient, because people would deliver materials such as clothes, shoes and furniture to my place and I would take them to the warehouse. With 4 kids at the house, of course, I drive a van. That made it very easy to transport stuff to the warehouse. To paint a picture - our hallway and basement were occupied by bags of clothing, boxes of shoes, cardboards full of catheters and bowel wash out bags, toys, furniture and so on. At regular intervals I would load the van and take everything to the storage place. Have you ever stacked a warehouse 3 meters high while you are 163 cm (5’4) yourself? That was a challenge.

And then Covid-19 came... It seemed as if the world stopped spinning. The advantage of the lockdown was that people had time to clean up and find valuable treasures that they were giving to the children with spina bifida and hydrocephalus. As soon as the situation allowed it, massive amounts of supplies were delivered.

In September 2020, the ‘Warmste Week’ (a warm initiative in Belgium that encourages solidarity in favor of charities) announced a change in concept. Fundraising campaigns were no longer possible, but people could sign up to perform voluntary work. Child-Help did a call-out to make panty liners. Panty liners? Yes! In between catheterization (draining the urine), this helps to collect drops. This way girls can go to school with peace of mind. Almost 50 volunteers enthusiastically set to work with the pattern donated to us by one of the foster children of Pierre, the founder of Child-Help. Just under 2,000 panty liners were to be sewn over the remaining months of 2020 by people with a warm heart. Those panty liners would go with the container to make a lot of girls happy.

We were ready to start the actual transport in June 2021. However, the timing is against us, again. Sea and air freight to East Africa had never been more expensive due to the market conditions (overcrowded ships, Suez delay, lockdowns, etc). So again, we investigate different possibilities. A full container, air freight for the most urgent material, sharing a container with another party, …

In the meantime, my colleagues in Tanzania had been applying for a tax exemption and after a long process this was also granted. ‘We are finally ready!’ so we thought.

On Thursday, September 29, 2021, together with several volunteers, we ensured that the goods were taken from the storage place to the warehouse of the carrier. We miscalculated the volume and apparently, we needed a 40' container instead of a 20'. So again, price discussions. We still had a room left in that 40’ container so I ordered extra medical equipment. It seemed as if fate was provoking or testing us. That extra order was delayed due to a shortage of raw materials (yes, we caught that wave as well). Fast forward a few months, everything got to the warehouse, I made a packing list in December 2021, and we were ready to leave. The container was to be loaded on January 4, 2022. Hooray! Oh, by the way, apparently, they also needed a list with the value of all the stuff. Argh! I then did a quick estimate of everything based on the packing list and hoped that was enough. That wasn’t an easy task because, apart from the medical material, almost everything has been donated. However, a price had to be given. On January 7, the container was to be loaded on the ship and I was informed that it would arrive in Dar Es Salaam on March 1.

It’s March 2022 and it appears that the tax exemption in Tanzania has been approved by a wrong civil servant and the correct person is now on vacation. The new application disappeared in a pile on her desk and was awaiting her return. After a few reminders, this also got sorted out. At the same time, my Tanzanian colleagues were told that more paperwork needs to be completed. This too was experiencing delays, which resulted in the container waiting, patiently, for us in the port in Dar Es Salaam, while the storage costs kept increasing.

At the beginning of June 2022, we were finally able to transport the goods to our office in Dar Es Salaam. At that time, the gas in Tanzania was apparently almost sold out and whoever wanted to transport had to pay the appropriate price... Fortunately the office is not far.

Fast forward to today - In Dar es Salaam, we rent storage space there for a small price, and now all goods are distributed from the office to our partners.

To make a long story short: all necessary and less urgent goods have now reached their destination. Mothers and children are thrilled because these goods do make a big difference in their lives.

Conclusion: We won’t be sending a container any time soon, but we will continue to look for ways to get material to its destination or to provide local deliveries at the best possible prices. 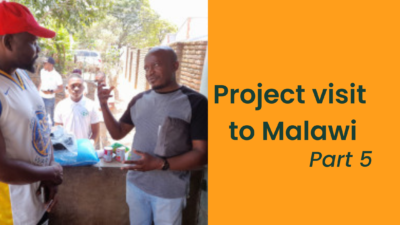 Here we are, the final piece of Pierre’s Malawi project visit. In this 5th piece we’ll also focus on Chisamo and his mother, Emilie. 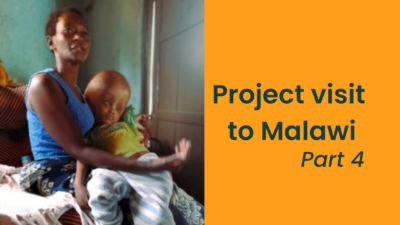 Welcome to part 4 of our Malawi project visit. We left off at the part where I was sharing my personal story with Emilie, about my daughter Liesje. That’s when Emilie started pouring out hers, and Chisamo’s. 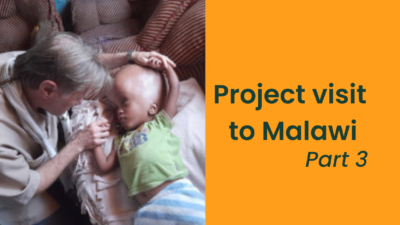 In the following part, you can read about what palliative care is, and how does it look like for children with Spina Bifida and Hydrocephalus. We will also start the story of Emilie and his son with hydrocephalus, Chisamo. 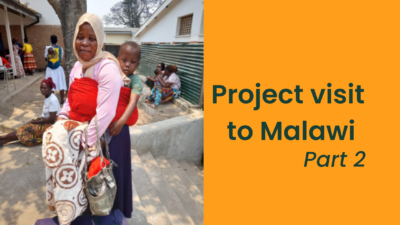 This is the part 2 of Pierre's story from the Malawi project visit. We will cover the story of Aisha and his son Razack, the Mercy James hospital, and future plan for CHSBH Malawi.